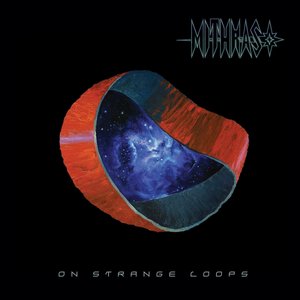 Back in the 2000’s, Mithras was quietly leading the charge with a string of potent and otherworldly death metal releases, culminating in 2007’s Behind the Shadows Lie Madness. But then all went quiet on the Mithras front (barring a short 2011 EP), and those in the know prepped to mourn the loss of another fantastic death metal act. But then Mithras emerged from the shadows with the promise of new material and low and behold, Mithras’ fourth album, On Strange Loops, has arrived.

With lengthy absence, often high expectations can get the better of the listener, but Mithras quickly dash that notion as “Why Do We Live?” begins to crank through the speakers. Often noted for their Morbid Angel-isms (think of a more space-y version of Formulas Fatal to the Flesh), that hasn’t disappeared with On Strange Loops. Tremolo-picking, trippy/echo-y solos and leads, and otherworldly tones do shift far into their own dimension, regardless of influences, and there’s more of an emotive connection to the music than you might expect. It’s the death metal that you’d expect from the act, but there’s something about the near-soaring melodic leads that make up this space that pulls you in more than the average band. At the same time, they can generate this swirling chaos that wraps itself around the listener (“Inside the Godmind”). The uniquely identifiable and commanding barks of Rayner Coss fit the tone perfectly, and it’s unfortunate that this will be the last time they will be heard within the band.

Mainman Leon Macey (guitars/drums) has obviously taken the time to ensure that everything sounds the way that it should when you listen to On Strange Loops. While remarks can be made about the technical ability throughout the album, more important is its sense of flow, particularly for a death metal album of this nature, as each track seems to have its own sense of purpose within the overall scheme. On Strange Loops is an album meant to be heard from beginning to end if you wish to enjoy it to the fullest extent. Despite a wait of almost a decade, Mithras have made a grand return that should interest all of the extreme community. Welcome back!