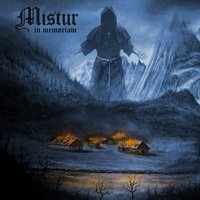 Being a Scandinavian, it’s hard to miss out on the various aspects of scandi-metal. Norwegian black metal has, for one, made a massive impact in the region as well as worldwide. The genre has even been saturated to some extent, with bands releasing albums that are well written and performed yet hold nothing new or interesting, other than for those most devoted collectors.

Mistur have been around for over a decade and have in all this time only released one full length album prior to In Memoriam. Being part of said black metal genre the band has still managed to fly way beneath my radar. And so, when In Memoriam landed in my lap I put the music on with a bit of a sigh, thinking I already knew exactly what I was in for. The album opener ”Downfall”, begins with an ambient synthetic piano-and-string-intro which doesn’t exactly make me jump with excitement. But only seconds later, the song kicks in. Far from the black metal of old, the killer production actually struck me from the first chord. This was clearly no ordinary worship of ye olde goat!

”Downfall” continues on with massive melodic riff structures, interlaced growls and clean vocals and some great progressive elements, notably in the drum department. And the rest of the album follows suit in a most excellent manner. Mistur obviously have mastery of their instruments and know how to write great, even catchy, songs. Taking the influences from their native black metal scene and commingling it with melodic death metal, progressive rock and a dash of symphonic extreme metal, the Norwegians have conjured six epic songs ranging from 7 minutes to a full 11 minutes. Yet the album never feels like it drags on or becomes repetitive. Much like the early work of Opeth, the songs are arranged to constantly invite the listener to new and fantastic soundscapes featuring a palette of vocal ranges, instruments and rhythms.

This said, it takes a while to grasp the full grandeur of an album like this (I’ve listened to it a lot before even considering to write this review). But there is no denying that tracks like ”Distant Peaks” and ”The Sight” should be entered into the canon of must-hear extreme metal tracks.