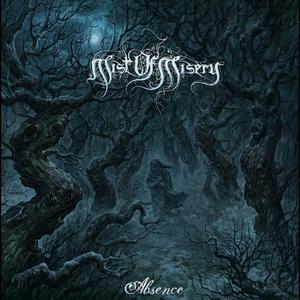 As we officially enter the fall season, it seems only appropriate to start cranking some symphonic black metal. The darker, colder landscapes of the genre are a good fit for the turning of the tide back towards winter. Sweden’s Mist of Misery are a relatively young band, with only a 2013 EP prior to Absence, and their full-length debut Absence does in fact bring back an older ‘90s symphonic feel to it.

Highly symphonic, Absence always has a cinematic and grand scope in its design. Of course, early Dimmu Borgir or Anorexia Nervosa are a solid comparisons but that doesn’t really give it the justice it deserves. Mist of Misery are far more focused on the composition of the classical elements and even when at full speed ahead, never really feels abrasive. Cuts like “Mist of Misery” and “Euthanasia” will showcase plenty of blastbeats, tremolo melodies, and mid-tempo riffage but it doesn’t punch you in the gut so much as just adds to the atmosphere. In fact, much of the album retains feelings on the softer side – acoustic guitars, synths, strings, or organ – often lead the music and give it a depressive/somber edge. While these parts are quite well done, and offer a different stylistic direction that many similar bands of the same ilk, many will find themselves longing for a tad more heaviness when listening to the album. It’s a more pensive and reflective type of experience than one of primal aggression and majesty.

More meditative and serene than beastly, Mist of Misery’s Absence is more darkly soothing than anything else. Methodically-paced and emphasizing more classical elements than frenetic metal, it’s bound to enrapture some with its depressive melodies, but there will be just as many that wish the band would pull out all of the stops just somewhat more frequently to give the listener a swift kick in the pants.