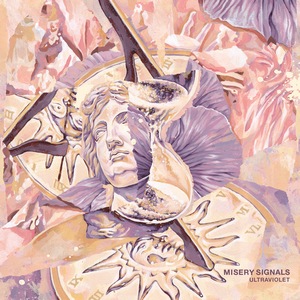 One of the more celebrated acts within the metalcore scene, and one that has long championed the cause, no doubt many are familiar with Misery Signals. That said, they haven’t released an album in seven years (2013’s Absent Light), and Ultraviolet comes with the added fervor from long-time fans in that it reunites the band with their original vocalist Jesse Zaraska. So, much lies on the line for the band with this one.

If nothing else, Ultraviolet is a testament to the foundations of when metalcore is performed well and without diving headlong into the potential clichés within it. Ultraviolet carries with it a sound of the ‘old school’ (odd to say that with metalcore eh?) in that the modern trimmings of electronics and high-spirited clean vocal choruses are (largely) absent. Misery Signals champion the guitar-based metalcore, and that alone puts the band in front of many of the acts that have since propagated the scene. The songs are heavy and carry a sense of urgency with them. “The Fall” opens with some atmospheric build up and somber melodies, before heading into some mid-tempo crunchiness. The chorus manages to then pack an emotive punch without resorting to clean singing, instead emphasizing the melodic riffs and Zaraska’s barks atop them. “River King” effectively juxtaposes punchy riffs with some more airy melodic moments without compromising either one. The quiet and short “Redemptive Road” is as melodic as it gets, with a gentle opening and some strong singing (some of the most blatant on the release) as it builds up quickly, but never losing its emotive power. But for those seeking more direct energy, opener “The Tempest” is a fine welcome back from the band, with a playful degree of melodies within the driving riffs, and a nice ‘call to arms’ type of chorus to get listeners invested. “Cascade Locks” works well here too, with lots of furious energy and just enough melody and emotion to wrap it all up.

An excellent return from one of metalcore’s elite, Ultraviolet is a nice reminder of the strong suits of the genre. Plenty of aggression and melody built into a streamlined and potent package.