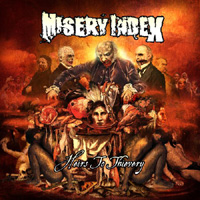 One of the biggest workhorses in death metal, Misery Index return with yet another smattering of politically-charged tracks to smash your face in with. The riff-heavy four-piece from Maryland have always had a knack of conjuring up memorable riffs and hooks that are quite simply, brilliant. 2008’s Traitors was a true-to-form monster from a band that has been releasing great work ever since their inception in 2001. Now we come to Heirs to Thievery, which keeps these guys going in the right direction.

The short but oh-so sweet “Embracing Extinction” blasts the album off like a NASA rocket. Unbelievably crushing rhythms immediately overwhelm the listener’s senses. If the blood isn’t flowing yet, then check your pulse. The onslaught literally doesn’t stop, with every track portraying the same jackhammer-like force that the many mediocre death/grind bands out there could only dream of attaining. “Fed to Wolves” is a particularly strong song brings some ridiculously fast leads as well as the usual inspired riffing that is trademark to Misery Index. “The Illuminaught” is another favorite that is especially strong in the drum work, which is chaotic yet incessantly precise. “You Lose” and album closer “Day of the Dead” are also particularly strong.

Gotta love a band that unapologetically brings it hard and is never afraid to speak their mind. This has always been an element of Misery Index that’s always stuck out, with many of their songs blasting corruption and providing insightful commentary to a plethora of social issues. Heirs to Thievery is no different, with everything from the blatant arrogance of many of the so-called leaders in the world, to outright greed of mankind chronicled in an honest and substantial manner. There’s also togetherness in this band that seems to grow with every album, as each is a little more focused and mature. Misery Index is unquestionably a band on the rise deserving of major attention.

As blunt as their lyrical message, Misery Index clearly is a band on a mission. Their live performances get better and better with every tour, and their recorded work continues a potent combination of ferocity and quality. This isn’t a band that’s going to experiment a whole lot, but who would want them to? Misery Index has been on the right path every since their first EP, with no deviation whatsoever with Heirs to Thievery. While this isn’t a long album – coming in at under 35 minutes – it provides some of the most intricately written and unrelenting tunes of its style.