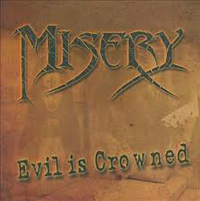 A slight improvement over their 2009 Fifteen Years of Aggression effort (which if our memory serves us correctly, Blistering didn’t fancy), Misery’s Evil Is Crowned is another attempt at flogging the spectre of 90’s-branded “balls and chunk metal,” something that just doesn’t cut in this day and age of high-wire metal acts. This thing is equally abrasive as it is boneheaded.

The band’s amalgam of New York-area metal (i.e. Pro-Pain, S.O.D., etc.) is as blunt and ugly as they come, with singer John LoCastro barking away like a dog chained to a tree. In essence: he gets annoying, and fast. And when the line “I don’t like you, I just hate you!” comes careening down, that’s when it’s time to duck and cover and brace for the barrage of numbingly dumb riffs and “street-ready” choruses, of which are on full-display on “Gone Tomorrow.” Yeah, some brutal moments go down during “I Hate Your Face” (what is this, playground humor?) and “The Hurt Spell,” but when stacked up next to the high-velocity, well-produced and well-played bands of modern extreme metal, Misery don’t stand a chance.

A perfect case of a band being a decade (or two) too late to the party, Misery need to expand on their one-dimensional sound. Evil Is Crowned doesn’t match up well to a lot of what is being released now, but hey, maybe the band can fuck some shit up in the live setting, where little (or no) thought is required.