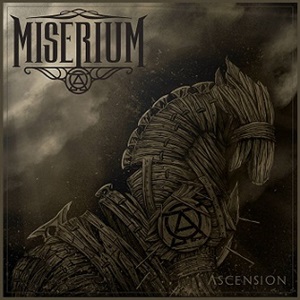 Thanks to the proliferation of social media newsgroups, musical discoveries globally can be instantaneous. Take Miserium – a Hungarian band that has been active for a decade, issuing a couple of EP’s, demo, and full-length prior to this latest second album Ascension. Incorporating numerous exotic and extreme nuances into their progressive metal platform, these nine tracks contain a treasure trove of melodies, riffs, and jaw-dropping sequences that keep listeners aurally at attention – a rare breed in this digitally driven marketplace.

Combining modern overtones in terms of a down-tuned guitar nature with pulsating keyboards and diverse vocal harmonies, these musicians appear as comfortable lowering the mood into clean sequences with an atmospheric, ethereal nature as they do going full-force in terms of juxtaposing time signatures, growls, and female background vocal supplementation. Church-organ strains against this foreboding angst gives way to serene, clean picking that rings out in the air for “Beyond the Walls”, while exotic riffing and shredding takes command for the carnival groove stomp follow up “The Rising” – occasional vocal effects magnifying the word impact. Comparisons abound from Pain of Salvation to Evergrey, Leprous to Nevermore – but as stated before, sporadic employment of growls and pushing of the extremes musically shape longer 9-10 minute efforts such as “Origin” and “Incomprehensible Act” with that old, 90’s Gothenburg death touch when appropriate. Because the vocals vary between alternative/rock crooning, solid metal belting, and even death metal, Miserium adapt musically with the same shape shifting mentality song to song – ensuring that Ascension isn’t going to be tedious or stuck in one arrangement/tempo benchmark for long. Baroque themes give chase to blast beats and triplet hits for “A Silent Prayer”, one of the second half winners, the orchestral keyboards taking flight over the strong male/female vocal contrasts and trilling/power chord switch-ups.

Intriguing, intoxicating, alluring – countless adjectives to describe Miserium in their creative use of multiple styles to develop their take on progressive metal. Ascension flies under the radar being on a relatively obscure label like Nail Records to most outside of Hungary, but don’t let that deter you from seeking out this gem.