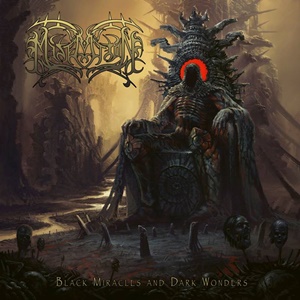 Best known for their work over the years in acts like Scar Symmetry and Solution .45, the duo of musicians that comprises Miseration return after a decade-long absence in the studio for Black Miracles and Dark Wonders. Taking on themes of gods and godlike creatures from the past in a Sumerian, Judeo-Christian, Norse, or other ancient cultures context, the eight tracks blend together melodic death metal with aggression, intricacy, and atmospheric/serene angles that showcase a passion and relentless appreciation for this style.

Jani Stefanović tackles all the instrumentation and additional lead vocals in spots – while Christian Älvestam modulates between his unmistakable low bellowing roar and comfortable clean register that can rival what Speed Strid does for Soilwork. Triplet movements next to bombastic orchestration and speedy drum programming set off a circular whirlwind of death/blackened proportions for “Reign of Fate”, while shapeshifting riffs cascade in exotic dimensions during “Shah”, the slower transitional sequence adding more anticipation for the subsequent furious lead break and Nile-oriented feel and phrasing. The band can turn from a blitzkrieg, apocalyptic riff one minute and then be very calm, measured and restrained with some bluesy lead break action – only to return to their heavier ways as “Desecrate, Dominate, Eradicate” tears through the aural landscape in memorable fashion. The lyrical content matches up seamlessly to the music – often possessing a soundtrack/score feel just transposed to a metal context. The final epic “Connector of the Nine Worlds” at 7:13 is the longest cut, opening through lower chants before the mid-tempo guitars and slower tempo gives off a Gojira/Meshuggah vibe, transforming into symphonic death twists as Christian’s amazing high clean melodies and deep bellows transfix the listener to its conclusion.

Four years in the making, Black Miracles and Dark Wonders showcases Miseration is still at the top of their game when it comes to bombastic melodic death metal with the right blackened, symphonic, and orchestration touches to move their followers.