Mirrors of Obsidian – From One Form (Neohuman Records) 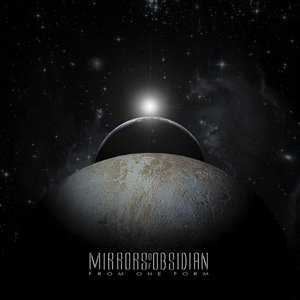 If you are going to go about doing extreme metal with plenty of chaos and vitriol, you may as well go to one of the ultimate sources for that sort of thing. Hence the Irish act Mirrors of Obsidian went to Mick Kenney (Anaal Nathrakh) for the mastering job of their new album From One Form. In turn, they’ve crafted a modern metal album that feels both futuristic and equally frantic.

Mirrors of Obsidian do a great job of grabbing you by the throat with opener “Neural Disease.” Fast riffing and a Gojira/Strapping Young Lad-type wall of sound erupts through thick, low-tuned guitars and just a touch of progressive riffing. The vibe feels almost like Mnemic at their best and most frantic – except pushed to a further extreme instead of moving in more melodic tones. Urgent screams fill the soundscape along with the guitars, relying on blunt force and velocity to hook you in. And it surely makes an impact – even when the band turns down the speed a bit (see “Blood and Chrome” or “Close to Interception” for good examples), which also gives some sleek Fear Factory vibes to add in the mix. The most appealing factor of the album is the sheer heaviness factor – the riffing just kind of sucks you into it (regardless of speed). Perfectly illustrated with “The Core,” where full-throttle riffing kicks things off before some more sly melodic and thrashy bits take over. Waves of higher intensity crash effectively into more mid-paced punishment, and the way that the drums, bass, and vocals weave in make it stand out that much farther. There are some sparse clean vocals (see the title track), but they are used in a natural and fitting way, never as a clichéd placement.

Lots to take in with From One Form. Pulsating riffs and a massive futuristic atmosphere are just the tip of the iceberg. If you enjoy modern extreme metal, Mirrors of Obsidian are a new band to put on the watchlist.