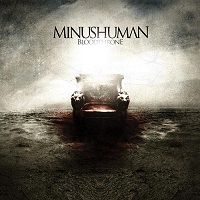 A touch away from falling into the blossoming line of Gojira soundalikes, France’s Minushuman have a pretty good thing going for themselves on their second album (and first for Season of Mist), Bloodthrone. With a full-throttle modern metal-meets-atmospheric spectre in tow, the band is on the brink of stumbling across something very special here, which makesBloodthrone a tad frustrating.

Opening cut “The Architect” gets matters going in the right direction with a bodacious melodic groove. It’s instantly infectious, bouncing along as an easy-breezy melody keeps the band’s full-bodied foundation intact. The same bodes for “The Size Of An Ocean” (which sounds like a Gojira sound title, by the way), although here, there’s an excellent atmospheric reprieve at the halfway mark. “Forgotten Fields” is another standout number, led by a gentle opening guitar

bit (ala Isis or Cult of Luna), eventually heading into a brisk Machine Head-like interior.

On the flipside, the band’s less melodic and more straightforward side is what takes Bloodthrone down a few notches. Singer

Cédric Moïse’s one-dimensional screams don’t add much to the proceedings when the band wants to get thrashy, like on “Evolve,” “The Day We Died” and “Three Mile Island.” This facet of Minushuman clearly isn’t their long suit, although the sideways thrashing of “Another All” works well…only because there’s an infusion of melody.

Essentially staring at greatness from across the street, Minushuman’s potential isn’t fully realized on Bloodthrone. There’s TONS of good ideas here and the band’s foundation will more than likely, warrant a more complete and essential album than this. That being said, very interested to hear what these Frenchmen have up their sleeves next.