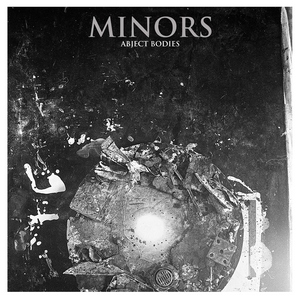 What does it mean to really be bleak and destructive? Is it something that is peppered with explosive riffs and noisy, rattling of drums and vocals? Or is it something that makes you want to swirl around in an abyss of self-loathing? In the case of Minors, they manage to make it into a little bit of both.

Despite there only being 30-minutes and seven songs, Minors present two different views of extremity on Abject Bodies. The first five tracks embrace more of a blistering and scathing tempo (with some occasional dips into slower, sludgier territory – see “Flesh Prison”) and succeed in hitting the battering ram mentality that merges caustic metallic riffs with powerviolence and rage. The guitar tone really sells things here, feeding you into the fray and disorienting with ugly sounds that would make some curl up into a corner. It’s riveting stuff, and as “Boneyard” bleeds into “Erode,” this over-the-top carnage twists its way into more sludgy/doomy territory that lumbers a much heftier type of riffage. The vibe is still a bit toxic, but “Erode” crawls and lurks in the shadows instead of grabbing you by the throat. While it lingers a bit too long, the closer “Garden of Dismalism” takes that more suffocating feeling of the previous track and turns it into a slow burner that escalates in tone and anger instead of staying constant, weaving a nice feeling of both parts of the band’s repertoire.

Full of vitriol and malice, Minors can do both throttling destruction with a hardcore/powerviolence vibe and then sink their teeth into something more introspective and dark. While the former may be more initially compelling, the band is onto something that works for them and keeps them from being viewed as a mere one-trick pony.