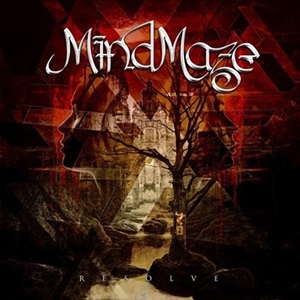 Ideally melodic power/progressive metal should encourage exploration of creative ideas and thoughts, executing them in an interesting way every time. Musicians gain life experience, improving abilities at their instruments, recordings, etc. for the benefit of stronger, cohesive final products. Sometimes as listeners we fear change rather than embrace it – afraid that moving on a slightly new path makes us lose what we cherish and appreciate so much in the first place. Ready to make a conceptual record, Resolve for MindMaze hypothetically puts more cards on the table stylistically on this third full-length than they’ve ever shown before – and over the course of this 13-track, 69-minute plus effort achieves a confident aural outlook that should be revered and treasured for a lifetime.

The segmentation of the record places more of the commercial-oriented fare like first single/video “Sign of Life” and the follow-up “Abandon” after the musically adventurous first-third opening. You will gain exposure to everything from tasteful acoustic to electric driven instrumentals in “Reverie”, riveting, progressive metal guitar work and strong supplemental interplay plus more aggressive melodies on “Fight the Future”, as well as a stunning “Drown Me” that in its 8:49 arrangement features Evergrey dark chord progressions, Styx-like pomp keyboards, driving Jake E. Lee/John Sykes like riffing and tasteful instrumental sections that supplement as an early moody highlight. Elevating their game in every aspect, bassist Rich Pasqualone gets several segments where he’s up to the progressive challenge in terms of leading the movement, speaking to his love of Rush and Dream Theater. Beyond the musicianship and songwriting depth from guitarist Jeff Teets and drummer Mark Bennett, MindMaze possess one of the richest, expressive voices in today’s scene with Sarah Teets. She takes her melodies to another stratosphere on the ballad “One More Moment” – a song that brings memories of Savatage and Mike DiMeo-period Riot to mind, and then can shift into a more metallic delivery on the heavier “Twisted Dream”.

When it comes to conceptual records, worry sets in that a listener could get exhausted consuming so much material at one time. Resolve however balances out the more musically adventurous songs with straightforward, anthem-oriented efforts – making “True Reflection” a second half uplift, the riff/tempo combination perfect for audience engagement. And for those who have any question about guitarist/ keyboardist Jeff Teets as far as his upper echelon abilities at his craft on either instrument, check out the jaw-dropping work on the epic “The Path to Perseverance” closer. The student here has ascended to be a teacher – thoughtful, emotive, bluesy, tasteful, and admirable all at once. Carl-André Beckston handles the artwork, portraying the layers of lyrics in hidden, mysterious aspects for the listener to ponder, to discover, to embrace. In an era where people question the validity of albums, Resolve should quiet the critics. MindMaze may have created this current generation’s Operation:Mindcrime, and have a bright future for melodic, power/progressive metal mavens to enjoy.