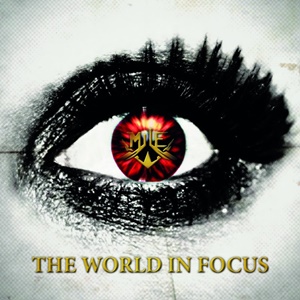 Forming in 2012, this Swedish band Mile develop a sound that straddles the lines of modern hard rock and aggressive heavy metal for The World in Focus, their second album. Considering this is this scribe’s first foray into the quintet’s sound, it’s interesting to hear how a mixture of American and European influences can come back with decent results – especially in a type of groove-oriented / current context that often lacks much sustenance due to overriding clichés.

The band possess that inherent ability to keep the main riffs and hooks very focused and in the pocket – while also injecting that killer exotic or melodic metal maneuver that elevates the material a bit beyond conventional corporate radio fodder. They’ll for instance start out a song with a lurking, mid-tempo groove that may be a tip of the cap to “Sad But True”/Metallica on “Sky Is Red” – only to watch the layers of Fredrik Palm/David Wallberg guitar action take over as the instrumental lead break embraces a simpler sparseness that drives the main hook deeper into the soul. Marcus Karlsson as a singer carries a broad swath of appeal – his obvious melodic skills and ability to carry a major chorus another feature in the Mile camp to place “Can You Feel the Night” and the rhythmic-oriented “When Time Goes By” on radar screens for fans as probably future live staples. The low-tuned guitar chug along with circular bass and forceful vocalization gives “Burning” that Engel/In Flames bounce, if Burton C. Bell decided to step into the scene during the verses for a dynamic breather – while “Sacrifice” ramps up the energy during the latter half of the record through its back and forth melodic/battering ram rhythms and another passionate Karlsson vocal performance.

Mile will not be for everyone. There are obvious half-time breakdown aspects or simplified ‘arena’ ready parts to pick out from front to back – but to these ears, The World in Focus is much more appealing than hearing another Avenged Sevenfold/Five Finger Death Punch wannabe roaring across the commercial landscape.