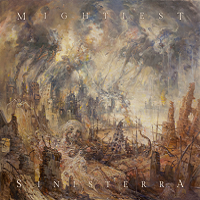 Almost, but not quite in the same situation as Graves at Sea (who we just reviewed), Germany’s Mightiest have yet to release a full-length effort until now with SinisTerra. This, after being around since 1994, not to mention the series of demos and EPs the band has to their name. It’s starting to feel like a broken record ‘round here, as long-running bands are finally getting their moment in the sun. Either that means there are no good bands in which to push, or, these veteran bands have something genuine going for them. Splitting hairs, obviously.

Nevertheless, Mightiest play a heartened brand of black metal. Since “German black metal” has never been a defined term, there’s the necessary crossover into the sound’s fertile base (i.e. Scandinavia), while prominent and encouraging droppings of epic metal round matters off. Not afraid to watch ‘em go with long, winding song exercises (“Oceanic Empires” might be the best foray of the bunch), Mightiest oftentimes find themselves running parallel in traditional BM, and folk worlds. Ultimately, it is the brute, punchy, yet atmospheric “The Purifire” and “Devour the Sun” that set the pace for the album, as they’re grueling, barbaric outings, buffed up by a modern production job and subtle orchestration.

Quite the unique find by Cyclone Empire, who have grown adept at unearthing quality European talent in the death and doom fields. Mightiest might be one of the biggest reaches for the label given their back story and lack of track record, yet SinisTerra has all the happenings and goings of a veteran BM outfit who has little time for the trappings of what the sound has become. Twenty years since their formation, Mightiest may no longer be Germany’s best-kept black metal secret.