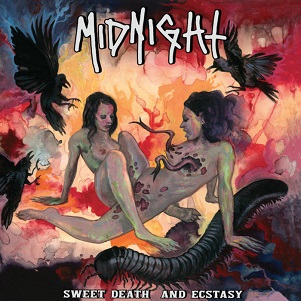 The crass, but controlled cross-breeding of Bathory and Venom, Cleveland’s Midnight, in their black masked, leather-jacketed glory, have become a cult go-to, the product of no-frills, but punchy death/thrash. And you can see the band’s profile gradually rising, whether through some tidy tour support slots or the praise thrust upon the variety of EPs and splits they’re so apt to take part in. This, of course, means Sweet Death and Ecstasy (the band’s third proper full-length, but again, let’s not forget how many other releases are to their credit) better deliver. Like a scythe through the neck, it does.

Main dude Athenar’s compositions remain tight, brandishing frothy riffing with the appropriate d-beat tumble. It’s not a new formula by any stretch, but the manner in which these riffs congeal with the drums and Athenar’s vocals, then it’s instant gratification. So in and out we go on cuts like “Rabid!” and “Poison Trash,” songs that rise above the vintage mire into easy headbanging territory, like, you’re right there, down up front as the masked men lay it out in between some beers or whatnot. However, we’ll point to closer “Before My Time in Hell” as the album’s peak, a coy NWOBHM stormer that puts a definitive end-cap to an album that is thorough in its execution.

Sufficient argument exists that Midnight has grown and matured, primarily in the musical department. While it was the consensus the band was really slopped-up and unhinged in the early going, on Sweet Death and Ecstasy, it’s the realization of what truly works for Midnight, which in this case, are dominant, fist-to-the-face thrash bashers. 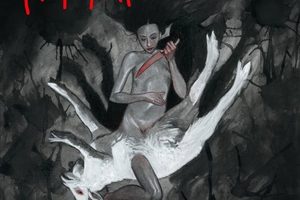