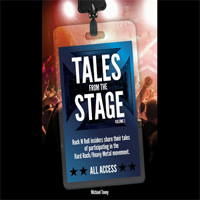 It’s no coincidence that 80’s hard rock/metal figures have better stories to tell than your average extreme metal jockey. Considering the free-for-all nature of those times (we’ll let you fill in the blanks), there’s no shortage of fascinating backstage and behind the scenes memories

in which to share. Realizing this, author Michael Toney has assembled 15 figures from the metal scene for individual Q&A sessions to comprise of his first book Tales From the Stage, a lot of which gets up close and personal. Personal, as in asking about someone’s income. Personal, as in asking how many chicks someone has been with. Things like that. Things that yours truly would never ask anyone in a million years…which is why Tales From the Stage is such a good read.

Toney was able to grab some rather high-profile figures, including radio host Eddie Trunk, former Kiss guitarist Bruce Kulick, former Judas Priest/Iced Earth vocalist Tim “Ripper” Owens, and Metal Blade honcho Brian Slagel, among others. The conversations are effortless to read, as Toney rattles off some well-researched questions (the chat with Malice’s Jay Reynolds regarding the 80’s movie

Vice Versa is priceless) while the subject either squirms or is candid. Most of the time, they are.

The real gems of the book

are amidst chats with former Steeler/Keel vocalist Ronnie Keel, who reveals he was once recruited to join Black Sabbath, former WASP guitarist Chris Holmes admitting he put peanut butter in his pants to make it look “like crap,” and LA Guns guitarist Tracii Guns calling his former bandmate Steve Riley “a douchebag.” Ripper Owens get his jabs in on Iced Earth (presumably Jon Schaffer) and former Scorpions drummer Herman Rarebell discussing Michael Schenker’s legendary drinking problems. There’s even more verbal nuggets to take away from Toney’s tome, but we don’t want to be spoilers.

All the credit should go to Toney, who knows his stuff and knows how to conduct an interview. Books

of this nature usually fall short of mark because of generalities, but Toney has no fear. He goes right into the lion’s den and comes away unscathed and in most cases, so does the interview subject. Tales From the Stage could not be more recommended for those who fancy 80’s metal.

Tales From the Stage official site