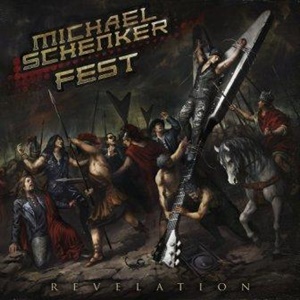 The old guard musicians in hard rock/metal aren’t getting any younger. When something works better than planned such as the reunion of key singers for guitarist Michael Schenker in his post-UFO/Scorpions career under the Michael Schenker Fest umbrella, you run with it. Last year’s Resurrection was a big hit – enough for the band to tour North America and Europe to parade out lengthy sets of past MSG classics and cuts off that effort. Surprisingly they’ve been able to turn out a follow-up in Revelation within eighteen months of its predecessor – speaking volumes to Michael’s incredible creative work ethic plus the professionalism of the musicians working on this material.

It’s another case of putting these singers in the ideal situations for the maximum spotlight when possible – as all have unique character, warmth, and abilities to shine. Gary Barden, Graham Bonnet, Robin McAuley, and Doogie White have been the main vocalists to team with Michael during the 1980’s and 1990’s, as well as the Temple of Rock albums in the early to mid-2010’s. All four vocalists trade off verses and harmonize in unison on the mid-tempo opener “Rock Steady”, which opens with almost a weeping guitar harmony from Michael while the autobiographical lyrics about a young boy becoming a man through the power of music unfold gets those juices flowing. Michael’s bluesy-infused metal licks along with a pumping rhythm section (bassist Chris Glen and drummers Simon Phillips and Bodo Schopf) command aural attention on the spitfire “Silent Again” and “We Are the Voice”, almost demanding proper call and response participation if chosen to make the live cut on tour. Michael also excels at memorable instrumental pieces where he’s able to showcase his catchy refrains and exemplary axe prowess, as you’ll hear on the closer “Ascension” that should remind people of his 80’s classic “Into the Arena”.

Because the record contains thirteen tracks and every singer appears on varied songs, there’s little chance for ear fatigue – and favorites could shuffle around depending on your tastes and mood. The multi-singer approach works again on the Rainbow-esque “Sleeping with the Light On”, while some double kick and organ/guitar dancing keeps “Headed for the Sun” peppy on the second half of the record. Add in the logistics of multiple studio sessions and production work by Schenker and Michael Voss in Germany and the United States, and it’s amazing how the final product sounds seamless and timeless.

Allowing many of the vocalists to develop their own melody lines and lyrics for Revelation gives this record even more of a cohesive shape than the previous one – proving that Michael’s career continues to shine in his third ‘life’. 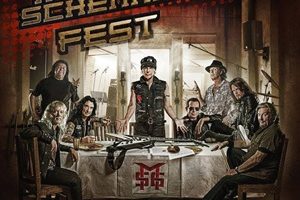