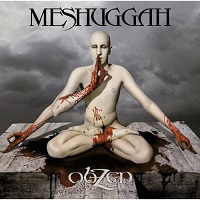 Early reports had obZen marking a return to the unbridled fury of 1998’s Chaosphere, but instead, it’s more of a combination of Nothing, Catch Thirty-Three and the aforementioned sonic maelstrom that thrust Meshuggah into the underground spotlight. obZen, in certain spots liquidates both Nothingand Catch Thirty-Three, but in other spots, it seems like the band is standing still, not quite sure if it wants to go bananas or sit around trying to confuse people with rather monotonous songs.

Opener “Combustion” is exactly the frenetic, crazed track the band needed to show they were going to meet initial Chaosphere expectations. Far and away the thrashiest song the band has written in 13 years, “Combustion” is the prototypical song for thrash circa ’08. “Electric Red” drags without gaining any real momentum, the result of Meshuggah still farting around tempos without any groove.

Obviously “Bleed” is the best song on the album. Released a few weeks ago on the Internet, the song is a ten-ton hammer of downforce, with guitarists Hagstrom and Thordendal pushing the limits of how hard they can down-pick and triplet. When drummer Thomas Haake unleashes a killer groove underneath it all, it’s hard to not to be enthused about what the rest of the album has in store.

Surprisingly, Meshuggah never fully capitalizes off “Bleed.” Songs like “Lehtargica” and “obZen” have some so-so moments, especially in the verse section of “Lethargica,” but don’t capture a band willing to step on the gas pedal and let it rip.

”This Spiteful Snake” is a solid number, with several contrasting moments centered around a winding main riff. “Pravis” is a head-spinner, utilizing the band’s trademark off-time signatures and bruising riffage.

Consider obZen half awesome and half respectable. Some are hailing this as an early Album of the Year candidate, but those claims might be founded in the intensity of “Combustion” and “Bleed,” two songs that could hang with anything off of Destroy.Erase.Improve.

Meshuggah finds itself in a unique position: they are possibly the only band that can push the metallic envelope forward without losing any real footing. Better yet, their grasp on extreme, forward-thinking metal has made them something akin to a mini-legend, which makes the relative stagnation on obZen all the more confounding.