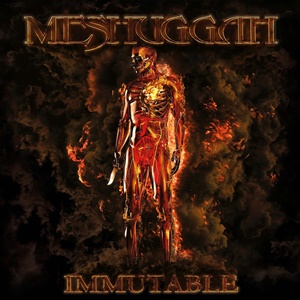 Evolving from their technical groove/thrash metal roots with their 1991 debut Contradictions Collapse full-length into the djent/polyrhythm aspects that made them superstars for the None EP and Destroy, Erase, Improve sophomore album, Meshuggah continually march to their own creative accord. Immutable is the latest effort, six years removed from The Violent Sleep of Reason – a sixty-six-minute odyssey featuring ten vocal-led cuts and three instrumentals – the longest of which “They Move Below” clocks in at over nine and a half minutes. The exploration of disparate emotions, light and heavy contrasts, plus churning djent/polyrhythm hooks that build up, around, and sideways ensures numerous playbacks to digest and process the musical information contained here.

Whispered voices appear at times in “Broken Cog”, while the shapeshifting guitar/drum churn and frantic jazzy tap breaks penetrate in the fierce follow-up “The Abysmal Eye” – the quintet executing these songs as seasoned craftsmen knowing when to lay into a circular pattern tailor made for body crushing action. Haunting tremolo waves ebb and flow during the closing instrumental sequence of “Phantoms”, while the aforementioned “They Move Below” is a blockbuster aural adventure – the dual clean guitar serenity a slow build for the doom-laden distorted heaviness that kicks in a quarter way through, more hypnotic twin harmonies creep over as the bass/drum syncopation has a controlled sense of stunting. The challenge of where Jens Kidman places his measured vocal bursts amidst the music remains a mystery – as he makes things seamless during “I Am That Thirst” and rollercoaster propulsive “Armies of the Preposterous” to mirror the tight as a whip musical proceedings. Ending the record on a left-field calm instrumental “Past Tense” lulls the listener into a sense of calmness away from the caustic whirlwind that the band delivers previously.

Meshuggah continually fills that niche between intricate polyrhythm/djent metal and moody aggression with foresight and groove to create a style that’s unique, moving, and all their own. Immutable won’t detract the faithful, and probably bring more into the fold – an ideal winning combination to sustain appeal.