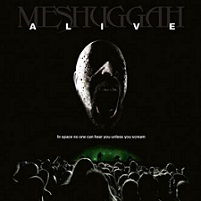 Finally satiating the need for a visual release, Meshuggah enters the live DVD

field with Alive, a two-disc set comprising of live and backstage footage, coupled with an audio disc of 12 songs

Visually, Alive is a captivating watch, as it’s shot in mostly black and white, thus adding to the cold, futuristic vibe of Meshuggah’s music. Multiple camera angles of the professional manner are employed, not terribly dissimilar to Nevermore’s excellent The Year of the Voyager set from a few years ago. Shot during the band’s Obzen tour, backstage/documentary footage is mixed in with live footage, which adds a nice degree of balance. Behind the scenes, each member is interviewed, shedding light on the personas that comprise Meshuggah. Nothing outwardly revealing here, save for guitarist Marten Hagstrom’s dead-on American accent. He doesn’t even sound Swedish; neither does drummer Tomas Haake.

The live set culls from every record of Meshuggah’s groundbreaking career, with set highlights including “The Mouth Licking What You Bled,” “Bleed” (which is pulled off admirably, given its technicality), the vastly underrated “Stengah” and standby “Humilative.” Conspicuously absent is “Future Breed Machine,” but that song

is SO overplayed anyway…

Disc two is paired down from the DVD footage, recorded in America, Japan and Canada, although differentiating each country is next to impossible. Obviously, some clarity and precision is lost and singer Jens Kidman’s one-dimensional bark turns stale rather quickly, yet this doesn’t deter “Rational Gaze” and newer jams like “Combustion” and “Electric Red” from coming across as winners.

A long overdue addition to the live metal DVD field, Alive serves as a cap to a decade that saw Meshuggah separate itself from its never-ending string of copycats. Devout followers of the band will no doubt jump all over this; those who have yet to catch on would be advised to start here or withDestroy.Erase.Improve and get with the program.