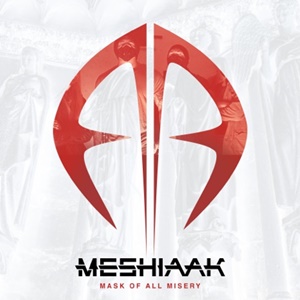 With a name derived from the Hebrew term for ‘messiah’, Meshiaak hail from the Melbourne, Australia metal scene and deliver a quite potent brand of melodic progressive thrash for their second album Mask of All Misery. Containing past and present members of acts like 4Arm and Teramaze among others, it’s obvious right away when taking in this material that we aren’t dealing with newcomers but a seasoned set of musicians who have proper skills at their craft and wish to execute their material from a professional, engaging standpoint. Throwing in all the right nuances, bells and whistles to flesh out the riffs, melodies, tempos, and hooks makes these ten tracks top tier outings for those who want more than the basic ‘bash and pummel’ output.

The power of the twin rhythms and accents emanating from guitarists Dean Wells and Danny Camilleri moves from straightforward power to heads down speed/ thrash – switching things up with tantalizing alternative/doom spices for “Bury the Bodies” as one of the early highlights. Deeper orchestration accents creep in and out to set a moodier overtone, but there are many times where the magnificence of vocal melodies of Danny – his register and ability to be aggressive when called for and smooth resonates well for those used to more arena hard rock-oriented voices – rising to the gallop cause for “City of Ghosts” and more emotive for the open chords and tribal-like tempos of “Tears That Burn the Son”. It’s hard to nail down specific music comparisons – elements of 90’s-era Metallica, Machine Head, and Trivium factor in against Grip Inc., Sepultura, and Metal Church to these ears depending on the song airing at the time. And to those who worry the album is front loaded with strong songs only to tail off at the end, wait ‘til you hear the monster guitar/drum combination against the forceful melodies within “In the Final Hour”. The breakout Meshiaak hit if there ever was one, creating a hypnotic, militant-like groove that stands the test of time with a melodic chorus harmony and twin guitar underpinning that rivals early John Bush/Anthrax mastery.

Meshiaak may only be two albums into their career, but this record is one that will gain plenty of buzz because of it’s progressive thrash and melodic power balance – never sacrificing either angle while crushing your ears and engaging your body.