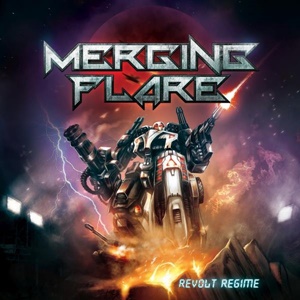 Although eight years have passed between albums, it’s not like guitarist Kasperi Heikkinen has been idle in the down time from Merging Flare. If you follow the power and symphonic metal scenes, you’ll know he spent four plus years in U.D.O., plus works as a second guitarist now in Beast in Black. Merging Flare is another Finnish melodic heavy/power metal band, signing a new deal with Ram It Down Records for their second full-length Revolt Regime – and throughout the ten tracks you’ll discover a mixture of 80’s/90’s influences, especially on the conventional European side that cause mandatory headbanging and should excite the legions of metalheads here and abroad.

The double salvo opening of “Trailblazers” plus “Alliance in Defiance” showcases the two sides of Merging Flare. The opener very much delivers an energetic, speedy double kick number designed for unison singing during the uplifting chorus, while the follow-up sits in more of a mid-tempo Accept-like swagger with a stairstep “Ahead of the Pack” chug reference, including a Teutonic-edged gritty vocal delivery from Matias Palm. Matias gives the band a difference maker voice – it’s not typical falsetto dimension, instead injecting a bit of a Graham Bonnet meets Kai Hansen presence as everything from mid-range melodies to jackhammer screams come to the forefront. 80’s-keyboard tickling pops up here and there, making “The Abyss of Time” an early standout, while the galloping tempos and power riffs galvanize the Gamma Ray-ish “Mind’s Eye (Reaching Out)” and the Running Wild-like guitar mechanics from Kasperi throughout “Midwinter Magic” assure the listener that the quartet live for the metal platform. Keeping the timeframes tight and to the point (nothing over five minutes) allows Merging Flare to serve up a dynamic, focused record – including an out of the box 80’s pop turned metal cover of “The Lucky One”. Originally done by Laura Branigan, the softer keyboard intro allows Matias to glide into the upper reaches of his voice as the arrangement evolves.

Considering Kai’s involvement now with the Pumpkins United/Helloween live/recording schedule – this is the closest representation to what you love from Gamma Ray if Accept and Running Wild decided to intertwine themselves in the style mix. Revolt Regime offers feel good melodic heavy metal with power, speed, and finesse – and hopefully will allow Merging Flare to gain a stronger foothold thanks to Kasperi’s steady development through his other work in the scene.