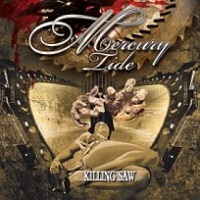 fter numerous false starts with the now-defunct (and sorely missed) Angel Dust, German vocalist Dirk Thurisch has resurrected his Mercury Tide side project. Killing Saw is the band’s first album since 2003’s Why? (which is also one of the first albums this scribe reviewed for the site), and takes on a slightly more metal tone than its light-in-the-loafers predecessor. And thankfully, time has done little to weather Thurisch’s voice – he’s still one of the more underrated European metal vocalists.

Thurisch doesn’t necessarily have a great amount of balls to his vocals and he can’t hit the helium-induced highs like some, but he’s awfully impactful when he wants to be, as heard on opener “In the Shame of Trust.” Alongside a clunky piano melody (which modern day Helloween would be all over), Thurisch takes pop metal sensibilities and merges them hardlined power metal/rock on “In the Shame of Trust,” as well as the up-tempo “Searching” and “Out of the Darkness.”

Given Why?’s propensity to be fluffy, it’s no surprise that Killing Saw drifts into AOR rock and ballad territory on “World of Pain” and “Lord of Memories,” the first of which is an obvious attempt at getting those to hoist their lighters in the live arena. On the reverse end of the spectrum, the jumpy “Satan Sister” is a gripping rocker, as is the brooding “No More Pain.” However, they’re each sandwiched by a syrupy ballad which if taken into account in the bravado-happy power metal, just can’t cut the mustard.

Lamentations about the lack of a proper Angel Dust reformation (check outBleed – it rocks really hard), Mercury Tide and Thurisch seem poised to have a stable career picking up the scraps from the big boys of German metal. Killing Saw won’t exactly mow down the competition or make festival crowds froth with approval, but it’s good to hear Thurisch singing again. Dude definitely has a marvelous set of pipes on him.