Mercenary – Through Our Darkest Days (Prosthetic) 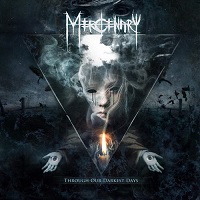 Admittedly, this scribe on some level is still smarting over the fact Mercenary never became metal’s next big thing. They have all the ingredients for such an ascension, of which we’ll detail below, so for reasons that are simply dumbfounding, their twin 11 Dreams (2005) and Hours That Remain (2006) never gave the Danes the boost necessary to run with the In Flames and Soilworks of the world. A lineup shift in 2010 significantly reshaped the group, who appear to firing on all the right cylinders on Through Our Darkest Days.

The album is bassist Rene Pederson’s second album as lead throat, having replaced the inhuman Mikkel Sandager for 2011’s Metamorphosis. Pederson doesn’t have the range or penchant for drama that Sandager does, so some of the chorus choices are reigned-in, as heard on “Welcome the Sickness” and “Beyond this Night.” However, there’s no lack of conviction from Pederson when he volleys between cleans and screams on “Dreamstate Machine,” a song strongly reminiscent of those fabled 11 Dreams days.

Still able to flirt with melodic death metal and power metal without getting their wires crossed, the grueling staccato rhythms of “A Moment of Clarity” are an album highlight; same with “Starving Eyes,” which is one of those Euro-poppy jams the band does so well. The album’s moment of climax comes via closer “Forever the Unknown,” where Pederson unleashes a barrage of harmonious vocal patterns that lend to the song’s gradual – and dramatic – climb.

Mercenary has always possessed broad appeal and the capability to be the all-world European metal band. Through Our Darkest Days doesn’t topple the band’s mid-00’s period, but it’s a strong reminder of how unique and creatively headstrong the band is. And, if you’re looking to shake down your music collection, snag 11 Dreams and Hours That Remain. Both are melodic metal at its finest.