Merauder – God Is I (Regain Records) 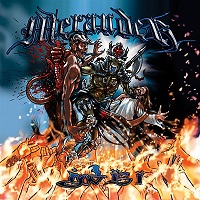 When hardcore stays in the metallic vein, the results are more often than not, above-average. Merauder, who have made a career out of just staying a notch below the likes of Madball, Sworn Enemy, and Terror, fall into that category, having enjoyed a mildly successful run on Century Media, only to land on the not-very-hardcore Regain Records for the release of God Is I.

God Is I stays away from rampant beatdown territory, preferring to let quasi-thrash riffing to take hold on opener “Until,” the swinging “God Is I” and the call-to-arms “Forgotten Children.” Vocalist Jorge Rosado has always been the best thing about Merauder and upholds that statement with an inspired, oftentimes zealous performance, highlighted by “Gangsta,” a song

about, uh, gangsters and hardcore.

“Perdona Me” takes on a more personal, down-to-earth feel, something that hardcore (in spite of its rampant chest-beating) has always embraced. Not like Merauder is getting soft, but songs

of sincerity – which there are too many to count in hardcore – somehow translate well. “Ahora” (which is sung entirely in Spanish) and “Never Surrender” hold down the back end of the album with Merauder’s usual aplomb.

Hardcore, in its infinite simplicity and lack of expansion usually keeps its heritage bands

, Merauder being one of them. God Is I, as noted above, is definitely on the metal side of the fence, which can strike one as funny

– aren’t hardcore kids supposed to hate metal? Who cares – Merauder lay ‘em out and throw it down on God Is I.