Mephistopheles – Sounds of the End (Willowtip) 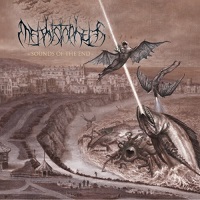 What year would be complete without an indulgence ye-olde-hyper-tech-death? This time around it’s brought to us courtesy of Australian instrument wizards Mephistopheles and a curiously covered album forged Sounds of the End. Within is everything you would expect: sweeps, blasts, rhythm changes galore, and all of the other hallmarks of the genre. As such the rating above is mostly arbitrary because if you’re into this genre, this album is likely to make you wet (especially the bass presence). For those of us who aren’t particularly inclined to the swells and tempests prevalent in this exacting form of metal, it’s apt to blur by with barely a wayward glance.

One need look no further than album center-point “Battle of the Sea and Sky” to tell you exactly what you can expect from the rest of the album: stops, starts, melodic asides, blast beats to the nines and all the variability you could hope for in harsh vocals. It’s competent to the max but like elsewhere, pay attention to something else for 20 seconds and you’re not sure if you’re on the same song or another as follow-up “Those Whose Skin Was Gold” features many of the same patterns, down to the jazzy chords laid out over blast-a-thons.

That’s not to say it’s all bad, it isn’t, it’s just exactly what you’d expect. There of course will be a niche group of people who eat this kind of thing up but for the rest of us, Sounds of the End is something best tasted liberally before indulging in fully.