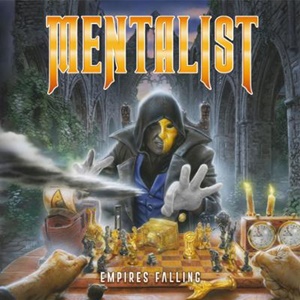 With a split country affiliation as far as the musicians between Germany and Sweden, Mentalist is a quartet that contains a prominent drummer in the power metal circles with ex-Blind Guardian’s Thomas Stauch. So it shouldn’t be surprising that we have another power metal group here – quickly arriving at their third album for Empires Falling, hot on the heels of 2020’s Freedom of Speech debut and the following year issuing A Journey into the Unknown as the follow up. After a few spins it’s evident that this act combines influences across the melodic, power, and epic landscapes – a host of 80’s/90’s-style mechanics diverse enough to appeal to a broad cross-section of followers.

The symbiotic riffing plus solo/harmony abilities within guitarists Peter Moog and Kai Stringer assuredly light up the sky in a versatile manner. Be it through clean to aggressive measures on opener “Solution Revolution” where Iron Maiden/Helloween-esque runs / gallops pulsate through the instrumental sections and key verse/chorus points or branching out with atmospheric, grandiose melodic touches during the six and a half-minute plus title track, they know exactly what to play and where to create more emphasis when necessary. Vocalist Rob Lundgren has a gritty nature to his otherwise smooth mid-range to higher falsetto natural delivery – everything from Kai Hansen to Davide Moras from Elvenking plus a bit of Swedish melodic hard rock/metal finesse to his capabilities, circling around all facets on the quick hitting “If You Really Want” while reaching his emotional intensity in the moody slow to speed epic “Out of the Dark”. Guest work on keyboards and bass appears with Kamelot’s Oliver Palotai and Symphony X’s Mike LePond, while the steady fills/solid power tempo command of Thomas carries the energy load during “Columbus” and “Heavy Metal Gaia”. Add in the key choir-like background vocal support, plus two interesting bonus cuts for “Forbidden Fruits” and heavy, samba/jazz-like “Bumblebee” and you have a full record at over 66 minutes that could be a bit much to swallow or process at one sitting.

Those who decide to get the box set edition can look forward to a plush Mentalist mascot toy and limited-edition t-shirt as perks. In the long run, Empires Falling will satiate most avid long-time power buffs who love Helloween and Blind Guardian put in a bit more current context.