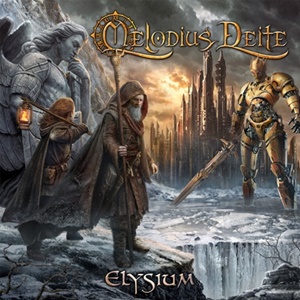 Rare to hear symphonic-oriented power/progressive metal from Thailand, but that’s what we have here in Melodius Deite. Previously known as Melodius on their debut album Dream On from 2008, they transformed into Melodius Deite in 2012 and have released two more full-lengths. Prior to the release of this newest album Elysium, only guitarist/keyboardist Biggie P. Phanrath remains – assembling a new lineup for bass, drums, keyboards, and vocals. Embracing a wider array of influences to include the feel/atmosphere of movie soundtracks, djent and extreme embellishing, the listener can expect to be transported on an aural adventure featuring diversity, intricate fusion and interplay, as well as growls to soaring, high-pitched vocal melodies.

Immediately noticeable are the power harmony combinations and layers of guitars/keyboards put forth by Biggie and fellow keyboardist Diego Zapatero – the type of progressive, neoclassical hooks that align with followers of Helloween, early Yngwie Malmsteen, and a bit of Kamelot/ Dragonforce thrown in for good measure. It’s hard not to want to break out your best air simulation tricks to the fleet of finger action during “Covetousness”. The semi-growls that appear in spots add darker texture to specific tracks – contrasting the normal power/progressive metal underpinning which can work brilliantly to the melodic, catchy chorus work for the mid-tempo, more straightforward “Acts of Failure”. At other times speed bursts possess a bit of that video game meets cinematic spectacle aspect that heightens your senses, expressing fluid motion but could struggle to engage more than the schooled musicians of the world as the opening instrumental “Destructive Chaos” contains lots of over the top insanity, while “Wrath of the Zealots” floats between power and symphonic bombast – the latter featuring more growls along with some potent high melodies from singer Mashahiro Yamaguchi (Yama – B). Melodius Deite understands the need to switch up tempos and mix it up a bit, as “Vainglorious Pride” has an interesting guitar/keyboard main riff component that allows the rhythm section to move between power groove and semi-speed intervals, allowing the arrangement to have dynamic drive throughout.

There’s a lot to take in over the course of 45 minutes here – but Elysium could put Melodius Deite on the map for keeping up with many of the premiere European acts in this genre. It’s more now a question of honing their craft into stronger hooks and putting the outside elements in the correct context for a more cohesive front to back experience.