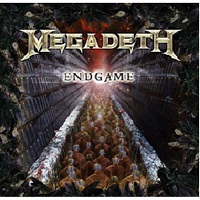 Megadeth Mach 28…and counting. Dave’s revolving door will never end and apparently, neither will his jabs at Metallica that just so happen to coincide with the release of one of his albums. The thing is, Dave doesn’t need Metallica to sell

Megadeth anymore – this lineup is as just as formidable as the Poland/Samuelson or Friedman/Menza eras of the band. Endgame is proof of this, ranking as the best post-comeback Megadeth

The addition of lead guitarist Chris Broderick (ex-Jag Panzer) was a wise one, as the bulk of Endgame is built around the man’s technically sound solos. By no means as emotive and memorable as Friedman, Broderick lets it fly on opening instrumental “Dialectic Chaos,” “This Day We Fight,” and “Bite the Hand.”

Riffs are all over this thing and while they’re not of Rust In Peace caliber, there are multiple choice, stellar, classic Mustaine riffs. Lead single “Headcrusher” is perhaps the band’s best (and heaviest) song

anymore – he’s snarling and if there was one minor squabble with Endgame, it’s that. In fact, the entire album has Mustaine in snarl-mode. It’s not like he needs to croon like he did on Risk, but the higher-pitch side of his vocals can add some balance, as Dave is becoming precariously close to becoming monotone.

There were some inklings Endgame would be Megadeth’s long-awaited response to Rust In Peace, but it’s not. Rather, it’s an album that comes close to flying off the handle, only to be reigned in by the mild commercial

temperament that is still evident in the band’s sound. No sweat, though, Endgame proves there’s still plenty of bite behind Mustaine’s bark.