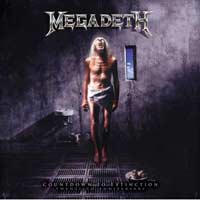 Mustaine has never quite achieved his career-long goal of catching Metallica, but with Countdown to Extinction, Megadeth were never closer. The makeup of both the album and era was a time of transition, as thrash was done, grunge was in the bullpen, and Pantera were still at club level. Only Metallica and Megadeth were able to maintain multi-platinum level; the latter going on to become the biggest metal band in the world, while Dave, Junior, Friedman, and Menza did their best to carry on, knowing full-well they were in second place.

Not to be confused with the round of reissues from 2004, the 20th anniversary set for Countdown comes with the original album, a live set culled from a 1992 show in San Francisco, new liner notes, a poster, along with four collectible postcards. It’s a pretty cool package to have, especially for those who own and have slaved over the original for two decades. The old, expiring dude on the cover still looks as creepy as ever, too. A shame Vic wasn’t paired with him…would have made for a cover on par with Peace Sells and Rust in Peace.

The original album contains a pair of the band’s biggest commercial successes (“Symphony of Destruction” and “Sweating Bullets”), but the real draw behind Countdown has always been underrated gems like “Architecture of Aggression” (love the CNN clip), “This Was My Life” and “Ashes in Your Mouth,” which in this scribe’s humble opinion, is one of Megadeth’s best songs ever. Subtract throwaways “High Speed Dirt” and “Psychotron,” and Countdown is without flaw.

The live show recorded at the Cow Palace in San Francisco is the set’s primary selling point. Then at arena headliner status, Megadeth’s advanced thrash sound was put to the test in hockey barns, with the results frankly, coming across as mixed. Mustaine’s voice still had the necessary helium burst, but since the band’s riffs and arrangements were so complex, some of these songs (i.e. “Wake up Dead,” “Lucretia” and “The Conjuring”) sound better left in mid-sized amphitheatres and clubs. Old Dave’s stage banter is priceless, though, especially when he complains about people throwing things at the band on stage. He can sound like such a wiener sometimes.

A reissue, anniversary set like this might be a hard sell in today’s climate, only because physical product has gone the way of the dinosaur. However, the nostalgia-minded and devotees of Megadeth will most certainly find some worth in this set. In the spirit of an election year, it’s fun to remember when the band (with duct-taped applied) told all of us to “Rock the Vote.” Sure beats Mustaine saying asinine things about Obama…