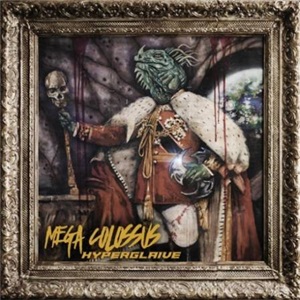 Not content to be an ancient, bigger than life size statue in moniker anymore, Mega Colossus erects itself out of 11 years as Colossus – a North Carolina heavy metal quintet who issued a full-length and two EP’s during that time (of which …and the Rift of the Pan-Dimensional Undergods wins my fantasy/mythology heart easily). Those who pay attention to the underground scene (an area most scribes at Dead Rhetoric fervently dig deep into) know that there’s a decent buzz percolating in this state towards old school, traditional metal – especially through the worldwide inroads Widow have made – giving this band a leg up in terms of quality appeal.

Admitting affinity for alcohol at all times, HyperGlaive resonates deeply with the 1980’s scene, as well it should given the wizards, warriors, and battle-laden themes for these eight tracks plus a dual axe attack delivering harmonic action left, right and dead center. The possibilities for thunderous rhythms and twin/triad guitar layered lead breaks give “Gods and Demons” and closer “Star Wranglers” that right epic power and melodic flurry that makes Iron Maiden and old Leatherwolf fans beam. Tranquil moments generate equal bits of marching strains in an older Thin Lizzy/ Judas Priest manner, “The Judge” succeeding because of the staggered vocal delivery for Sean Buchanan plus the added propulsive bass accents by Rylan Wilshire as the riffing moves at a comfortable, mid-tempo cruise altitude. The spider-web oriented guitar interplay of Bill Fisher and Stephen Cline takes center stage throughout, epic and engaging in a manner that makes you think of classic Omen, Slough Feg, and Visigoth – check out “Behold the Worm” and opener “Sun Sword” for sure-fire devil horns approval hooks that could forge many to conquer any proverbial beast that lay before them.

Sean’s mountain top bellow contains clarity while maintaining metal to the bone ethics and execution. He can easily hit Halford-esque bird call notes during key chorus moments of “Sun Sword” – but reminds me most of Riot V’s Todd Michael Hall and a pinch of local brethren Widow in the sense of developing lower and mid-range melodies that are equally captivating to the ears, leaving you hanging on every word during the progressive-oriented “You Died”. Quality sound, throwback cover, and themes that resonate for the escapist in us all – there’s plenty to devour and champion in Mega Colossus. Fresh off a small fall tour run with Freedom Hawk, be in line to scoop up HyperGlaive if any of the stylistic similarities cause excitement to all your metal senses.