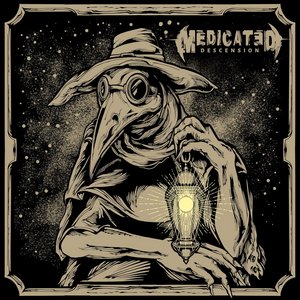 Nothing better than randomly clicking on a cool piece of artwork on Bandcamp and finding a crown jewel of a band. Medicated is a Finnish melodic death/thrash act that popped out a few EPs around ten years ago, and have resurfaced in a major way with their first full-length album, Descension. Those who enjoy a side of groove with their thrashy energy are going to be quite impressed.

Given the band’s extensive, yet quiet past, there’s not too much of a surprise to hear how professional that Descension sounds (it was also mastered by Jens Bogren if that’s any indication). There’s an effective wall of sound that they can generate as the pounding drums, playfully intricate guitars, and vocals come together for some fantastic choruses – as “Breakdown” showcases early on. Other songs, such as “Heaven in Shadows” and “Chains of Gone” really dig into this melodic factor. Focusing on bulking riffs and diving headfirst into spiraling and epic melodies that all but want you to stand up with a raised fist in the air and shout along. There’s also plenty of fat, meaty grooves to dig into as well. “Recitation” is the go-to example here, and it’s basically start to finish headbanging riffs that linger around a mid-tempo chug that really hits the spot. It’s driving and aggressive, and with the production, it’s a fine track to crank loud and enjoy at full volume. In addition to the melodic riffs, the solos are also quite fantastic – catchy with just enough showboating flair to keep them exciting. The floaty yet triumphant “Delusion” being a standout. Lastly, the vocals along the way are varied and quite fitting. Everything from barks and snarls to a Devin Townsend-esque shout that may make you think the man himself dropped in when you start up “Fallen One” are at hand, and completes the band’s modern melodic sound.

Descension has all of the makings of a sleeper hit. One can only hope that some more latch on to Medicated and join the party, because it’s rare to hear this type of melodic death/thrash so effectively done by a (relatively) new act. Simply a must if you enjoy acts like Darkane or Threat Signal.