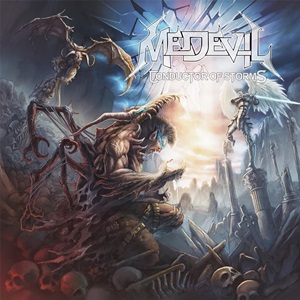 Our neighbors to the north in Canada continue to pump out a healthy swath of metal bands across the landscape. For years ruling on an extreme terrain, there’s always been lurking in the underground just as fervent a traditional metal following along with its power offshoots. Chilliwack, British Columbia is home to Medevil, a five-piece that in 2 ½ years have hit the Wacken Battle finals for all of their country, plus developed a following in the Vancouver area. Conductor of Storms is a full-length debut that reaches back into a host of old school influences, straddling parameters that live up to the ideals of the genre while not necessarily seeking out commercialism or current trends.

Medevil has a firm grasp of power rhythms and mid-tempo oriented arrangements, proficient in many of the standard licks and tricks that brought Dio, Judas Priest, Iron Maiden and their heavier offshoots to the attention of metalheads during the mid to late 1980’s. An extended instrumental introduction for a 7:40 track like “The Angel of Rain” allows the guitarists a chance to really explore softer, clean textures that along with the open bass chords fills the sonic space beautifully – when the electric march groove kicks in, you feel like a proper melding of Iron Maiden meets old Metal Church taking shape. The lyrical content can take on a certain familiarity, yet replacing one word makes it oh so much heavier – ‘beating the iron horse’ within opener “Nightwalk” or a first for this scribe as ‘uxoricide’ (definition: the killing of one’s wife) appears in the closing 12 minute-plus epic “The Fabled Uxoricide”.

When the drumming and guitar energy get ramped up to almost thrash levels, Medevil really showcase their musicianship and rhythmic interaction – as “Escape” is the highlight of the record to these ears, reveling in a main riff that beams Vivian Campbell meets Randy Rhoads-inspiration. And if Kurdt Vanderhoof ever desired a David Wayne sound-a-like, he only need hear the pipes of Liam Collingwood – resolute, maniacal, and commanding throughout this eight song platter, but with a twinge of old Jon Oliva when necessary especially on the gallop-oriented “Nightwalk”.

You can’t go wrong with the sick Ever Sanchez cover, and the production values are on par with label product (love the lively snare sound on this). Pretty solid stuff from a group of 20 to 30-year-olds playing a form of classic, old school power metal that probably won’t appeal to the Euro-happy brigade, Conductor of Storms will nonetheless find its place in a lot of ardent Metal Church/Iron Maiden collectors’ hearts.