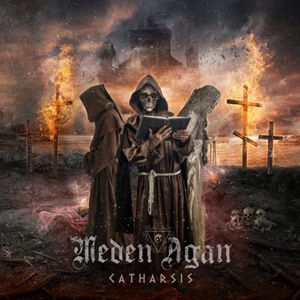 An Ancient Greek name for ‘nothing in excess’, Meden Agan is a quintet that since arriving in 2005 has developed an interesting gothic/symphonic metal blend over the course of their history. They’ve released a couple of self-financed full-lengths, been through a few member shifts, and had the opportunity to share the stage with Pain of Salvation, Within Temptation, Epica, and Skyclad among others. Catharsis as the fourth album represents a fresh start with No Remorse Records, and debut for latest singer Dimitra Panariti who has been with Meden Agan since 2015. Considering the expansive reach these groups now offer in terms of style and substance, it’s a great time for the listeners to discover acts from all over the globe.

It’s always a delicate tightrope to balance out the bombastic, theatrical elements when it comes to keyboard orchestration and operatic-oriented melodies while still keeping things metal-oriented. Meden Agan succeed on both fronts, as guitarist Diman Koutsogiannopoulos delivers a stirring mix of powerful riffs, harmonies, and incendiary lead play when called for. Check out the flashy arpeggio runs during “The Purge” as proof of axe prowess, while throwing in thrust and volley moments against the brighter keyboard passages for the Kamelot meets Epica oriented follow-up “Cleanse Their Sins”. Sing-a-long vocal/keyboard syncopation occurs on the commercially enticing “Shrine of Wisdom”, the track featuring killer drum transitions and a seductive Dimitra-led vocal that showcases a bit of her personality during the mid-range to higher octane verse/chorus work. Diversity appears to be a key to this record, as whispered growls and sinister voices aid the faster riffing and semi-progressive transitions for second half highlight “A Curse Unfolding” – keyboardist Tolis Mikroulis mixing up his orchestration duties with sprinklings of hooks that along with the thunderous double bass elevate the energy and catchiness of the arrangement. The concept record (based on an Umberto Eco novel The Name of the Rose, a fictional murder mystery set in a 14th century Benedictine Italian monastery) lends itself more than adequately to the twists of aural output, and could inspire many to seek out the book.

Another factor for enjoyment lies in the band’s ability to ween themselves off prolonged setups or instrumental sequences – most of the material sitting in that four to five-minute sweet spot for ideal retention. Because of the band’s neoclassical propensities, Catharsis will probably gain as much appeal from the musician side of power/symphonic metal audiences as it will the normal crossover support of those who appreciate the bombast, the drama, the tension, and the dynamic diversity on display. A strong outing to start 2018.