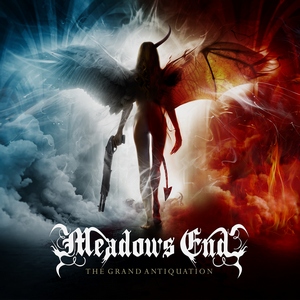 If there’s been one band in the melodeath arena that have been building themselves up blue-collar style over the years, Sweden’s Meadows End should receive the nod. The Grand Antiquation marks their fourth release, and the official follow-up to 2016’s Soujourn. Those who enjoy their melodeath metal pure and triumphant are going to get some serious mileage out of this one.

Along with their previous releases, Meadows End aren’t out to reinvent the genre. What makes The Grand Antiquation stick out is simply the attention to detail the band dole out. With the focus on two distinct features: the guitar melodies and the synth/orchestral arrrangements, Meadows End never run short on catchiness. The use of keys and the arrangements are joyously varied, as some tracks go for more of a sci-fi vibe (“Non-Dreaming Eye”) while others exude elegance (“The Insignificance of Man”), each going for an extensive role but never really stepping over boundaries and taking away too much from the rest of the band. The guitarwork will be a treat for fans of Insomnium or Dark Tranquillity, and occasionally dips its pockets into something more akin to Hypocrisy – pulling in bits of brutality (in moderate levels) while maintaining something that stimulates the ear. In this aspect, the vocals play in nicely, mostly sticking to the growled/screamed side of things, only occasionally dipping into the cleans to make sure they stay effective. They also keep the energy level up – there are some slower and more ‘epic’ riffs but its balanced with some infectious gallops and mid-tempo stuff.

The Grand Antiquation is good ole fashioned melodic death metal at its peak. Not overly fancy nor is it bare-bones, just peppered with enough keys and melodies to keep the listener engaged without having to lean into the more ‘commercial’ approach that many modern acts try for.