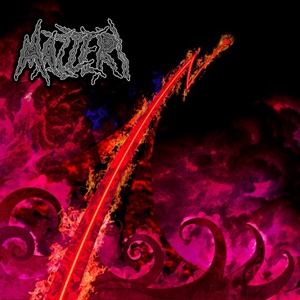 Celebrating life since 2017. French act Mazzeri approach the doom genre with a progressive, left-field slant on their self-titled debut album. Sparse background information indeed regarding the four-piece, and their purple-hue/psychedelic imagery including the twists with their personal pictures adds depth to the mysterious vibe present before even pressing play. Normally four songs would be considered an EP-length effort, but when you have no song under 8:39 and two sprawling over thirteen-minutes, it definitely hits that full-length mark, two songs per vinyl side. In the end, this material contains ethereal enchantment, slow burn riffs, alternative/gothic rock low register vocal melodies and appeal to those who love subtle progressive movements against atmospheric, circular doom traditions that build out anticipation for which direction the song takes.

The guitar work from vocalist Thomas Viti is exquisite, occasionally reaching David Gilmour/ Pink Floyd emotive textures during the 16-minute closer “Gouffre” where keyboardist Jbaâl lays down pipe organ sections that match the slumber and circus-like charm. The arrangement unfolds into many surprising doom ups and downs, where you don’t necessarily know when the ringing chord will come back into the fold – a saxophone assist from bassist Olivier Torre adds a noisy character to the crushing electric proceedings. Whereas the opener “Prophete” starts off with a calm, clean guitar refrain and eerie keyboards setting up the aural landscape before kicking into second gear (for doom’s sake) as the music and vocals move as one in poetic splendor a la Primordial meets Pallbearer while factoring in some Yes/Genesis 70’s interplay midway through the track. Then the final five minutes of “Megachurch” is an exercise in patience, after a heavier start and swirling, atmospheric midsection the musical passage goes into a relative slow heartbeat slumber where once again you leave to chance when the riff returns to its glory or the drum hit crashes. Many will have to be in a specific frame of mind to grasp all that Mazzeri is going for, but the payoffs can be huge as this is definitely a headphones type of record to capture all the segments, layers, and shifts from tranquil beauty to dark heaviness.

Mazzeri use Corsican folklore as their word backdrop for the record to match the epic feel of the music. Another amazing effort for a newer band – curious to see how the next record expands upon this, as it feels like they could take things in a multitude of directions given the tools at their disposal.