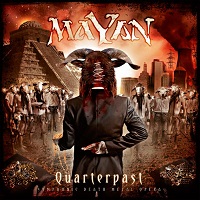 The side project of Epica guitarist Mark Jansen, Mayan is certainly a grandiose lot; sort of a mix between brutal death metal, and the symphonic mummers Jansen is usually popping out in Epica. Not necessarily a bad idea on paper, yet the band’s Quarterpast debut feels a little undercooked considering all of the big names involved (read: God Dethroned, Epica. Obscura, Pestilence, After Forever). It’s like they swung for the fences but only hit a single up the middle. (Sorry, it’s still baseball season.)

With a foundation of meat and potatoes death metal, Jansen and co. are quick to drape themselves in quite the array of symphonic movements. The keyboard action of Jack Driessen is usually the first thing to stick its neck out, oftentimes adding some spice of Jansen’s one-dimensional back. Driessen does add a soundtrack-like feel to the grueling “Mainstay of Society” (guest vocals from Simone Simons and Floor Jansen to boot) and the breakneck “The Savage Massacre,” which is aided by a ravishing clean chorus from Henning Basse.

Elsewhere, the chunky “Bite the Bullet” emerges as one of the album’s more flavorful tracks thanks to (again) Basse and Simons’s vocals, both of which end up stealing the show on a more than a handful of occasions. Yet it’s the base-death metal attack here that ultimately sidetracks Mayan, with “Drown the Demon” and “Celibate Aphrodite” needing more clean chorus moments (and spoken-word, too) to compensate for the band’s ill-timed death metal moments.

A debut that’s just quite not there yet, Quaterpast ends up being more of a showcase for the guest musicians assembled than Mayan itself. And without the parties involved, the album would have even less of a leg to stand on. Either way, the template laid out by Jansen for this isn’t necessarily a bad one, it’s just more flash than substance in the end.