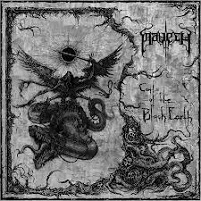 Oftentimes, fledging bands write debut albums that are too big for their respective britches. Any band of the technical top-rung (i.e. Rush, Voivod, Coroner etc.) will attest that sobering to the idea that less is more ultimately prolonged their careers, making some of the early exercises in excess seem juvenile. Finding that happy medium generally comes with age and missteps, something Finland’s Maveth might stumble upon after the metal press has its way with their bloated debut, Coils of the Black Earth, an album flooded with lackluster ideas and concepts.

Since the band’s 2007 formation, Maveth has had plenty of time to do some tinkering in the shop, producing an EP and demo. These two releases should have been the testing ground for the band’s elaborate concoction of death and black metal, yet Coils of the Black Earth sounds like its reaching…and reaching…and reaching. The muddled mess that is opener “The Devourer Within the Gulf” is a seven-minute trek through treachery; a song without a foundation, left to twist in the wind. Riffs are pieced together with glue, it seems, and since it never finds fertile ground, it spills into the rest of the album’s remaining nine tracks.

The painstaking affair that is numbers like “Hymn to the Black Matron,” “To Seed the Succubi” and closing one-two of “Terminus I: The Burning Offal of Hinnom” and “Terminus II: Hinnom Everlasting” really don’t have much of an identity to them, translating as rough cut death metal creations that should never have made it past the cutting room floor. And it’s not like time is a big factor here, but the album’s 57 minute running time should have at least, had 20 minutes of it cut off, as if only to spare unsuspecting listeners roped into thinking Coils of the Black Earth was an intellectually suave and brutal offering. It’s not.