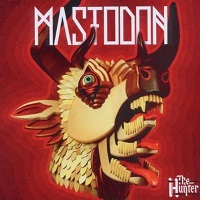 If things were the way they’re supposed to be (as in, people still bought physical product and the industry wasn’t in the toilet), Mastodon would arguably be the scene’s commercial

representative. Reason being, Mastodon is awfully good at what they do, without the negative trappings that regular music folk find unsavory about metal. Better yet, they’re a smart bunch. Realizing that following up a concept album (2009’s Crack the Skye) with another concept record wasn’t a wise move, the band returns to its homegrown metal roots on The Hunter.

One could quickly point to the stellar works of Leviathan and Blood Mountain as being the reference points here, but Mastodon has grown even more multi-faced and involved since those albums. There’s a lot crammed into these songs, with octopus-armed drummer Brann Dailor providing a rollercoaster’s worth of excitement into each fill, while guitarists Bill Kelliher and Brent Hinds still manage to make the most jangly and down home-sounding riffs fit into the constructs of metal. You could spot a Mastodon song

a mile away, and on The Hunter, there’s several good jams to speak of.

Highlights include the dirty (and funky) “Curl of the Burl,” the dark and challenging “Stargasm” (which could be the only song that would fit on Crack the Skye), and twangy “Octopus Has No Friends.” The vocals are triple-teamed once again, split primarily between Hinds and bassist Troy Sanders, although Dailor gets in on the fun during “Creature Lives,” which could be the best song of the lot.

Since a lot of these songs

strike early and often, The Hunter might emerge as the band’s most instantly-gratifying album since Remission. Not to say Crack the Skye was a tough go, but The Hunter proves that when Mastodon wants to let it rip, they certainly can. And since this one is an easier one to get a handle on, the Georgia boys can knock out another complex concept album next time around. You smart gentlemen, Mastodon.