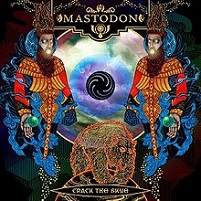 Lots of derision around this one; Crack the Skye is not the bruiser people were expecting to it be, but if it’s anything, it’s more rich, wide, and built-out than 2006’s Blood Mountain. Those in search of those mountain-moving riffs ala “March of the Fire Ants” or “Blood and Thunder” aren’t going to find it here. Instead, a touch-and-go prog metal album (is this a sign of things to come?) can be found on Crack the Skye and in the end, it’s quite gratifying, even mildly striking.

Across the board, Crack the Skye is evident of a band honing in on a sound all their own. The flow of this thing is unreal, seemless, even. It starts with “Oblivion,” which might have the band’s best chorus to date, helmed by guitarist/vocalist Brett Hinds’ old-soul melodies and relaxed, at-ease vibe. In fact the vocal interplay between Hinds and bassist Troy Sanders makes this album go – just check out the hazy prog sing-off during closer “The Last Baron.”

Lead single “Divinations” fits right into the pocket of the band’s past output, as drummer Brann Dailor lays out one dazzling fill after the next, oftentimes coming dangerously close to throwing the tempo off, only to find his back home. The four-part “The Czar” (loosely based on the live of Russia’s famed Rasputin) is well-executed across the board and has a host of killer Southern-fried rock riffage.

A Brendan O’Brien (Pearl Jam, Soundgarden) production job makes Crack the Skye sound like an actual album. It’s orchestrated, produced and pisses all over any and all Pro-Tools dominated creations of late.

Crack the Skye could be the tipping point for Mastodon, as it dangerously starts to move away from pure metal (not like they ever were “pure”) and down a less traveled, even less popular road. Going prog is major risk and Crack the Skye is a risky album, but the rewards and savory, eyebrow raising listens are worth it.