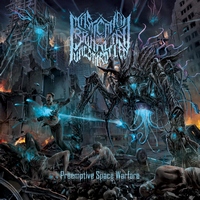 Talk about a mouthful! Mastication of Brutality Uncontrolled (from this point forward referred to as MOBU) doesn’t exactly roll off the top of one’s tongue. Perhaps that’s a glimpse into the future – all the simple names have already been taken. Regardless, MOBU does represent the band’s mantra pretty well, as the sound could be easily described as heavy and chaotic.

Given the band name and album title, you don’t have to read too far into this in order to determine MOBU’s sound. Heavy, brutal death metal with almost equal doses of technical fury and visceral slams. It’s a solid mix between the two, each getting their own space to shine in. You’ll go through technical flourishes as you move through each track, occasionally easing into a bit of groove and then it comes…hard-hitting slams. “Brutal Laser Devastation” is a good example to pull from, with plenty of churning, NYDM-styled groove that slowly decelerates into more rumbled slam riffs. But the band is quick to pick up the pace into blast beats and dizzying riffs to keep you on your toes. MOBU keeps things coming in short bursts of ravaging brutality, but the surprise comes in with the final track, “New Space Order.” The band impresses quite a bit with this longer track (almost 8 minutes compared to the other 2-3 minuters) with their ability to keep things interesting – seemingly going from one killer riff to the next with the dynamics mentioned above.

Fans of the more technical side of the slam genre should be sure to check out Preemptive Space Warfare. Heavy on groove, heavy on slam, but technical enough (and varied enough) to keep the listener’s attention from start to finish. All the makings of a sleeper hit right here!