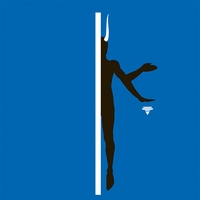 On the weirdness-for-weirdness scale, Valis scores an obvious ten. It’s often pontificated here and other relevant sites as to how difficult and outlandish certain black metal bands can be. Generally, we point to France for such things. But on a broader spectrum, the utter bastardization of the style has bred a relentless wave of fucked-to-the-nth degree bands, many of them who sound like they threw their music together on the spot, with no coherent thread. If ADD were the designated trait here, then Mastery would be black metal’s poster child.

Hailed as an album with “100 riffs per song,” Valis is often so overextended and random, that following the actual songs is a difficult task, even for these seasoned ears. Granted, it’s somewhat cool to have 100 riffs in a song – there are bands who probably haven’t written that many riffs in their career, but it cancels out any positive momentum main (and sole) dude Ephemeral Domignostika creates with his, uh, mind-fuck’ed creations. His odd approach to the guitar and chords (let’s just say Piggy from Voivod would be proud) is above and beyond what the likes of Blut Aus Nord and Deathspell Omega have done; same for some of the subterranean outfits ala Abyssal and Portal. Trouble is, they’re so in and out, that recalling any number of them is highly unlikely.

It’s entirely possible Valis will be hailed, saluted, and praised to the nth degree by the hipster throng, who have so casually strode into black metal like they’ve owned the joint since the early 90s. And, it’s not a reach to think more bands and/or individuals will try to follow in Mastery’s path. This is without question, one of the most perverse and complicated black metal outings in quite some time. Couldn’t draw it up any more bizarre.