Masters of Metal – From Worlds Beyond (Metalville) 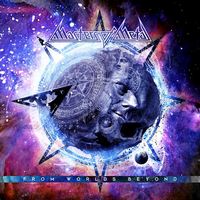 Easy to get Masters of Metal confused with Metal Allegiance. Well, anytime you put the word “metal” into a band’s name, there’s bound to be some crossover. But anyway, Masters of Metal’s From Worlds Beyond is coming out roughly the same time as Metal Allegiance’s debut album. Little wonder as to whose album will get more attention, yet that’s beside the point – Masters of Metal has some quality dudes in its ranks – the Agent Steel quartet of Juan Garcia (guitars), Bernie Versailles (guitars & vocals), Robert Cardenas (bass & backing vocals), Rigo Amezcua (drums).

Hovering just underneath the thrash banner, Masters of Metal may not recall the full-frontal technicality found on their main act, but there’s some serious prog playing going on, like on the bass-intensive “Eclipse.” The clean, quasi-operatic vocals of Versailles takes some warming up to. He’s somewhere between the ringing highs of Ray Alder (Fates Warning) and other airy, progressive metal singers. Therefore, the meaty riff action found on “World Left in Cinders” and “Doors Beyond Our Galaxy” serve the man’s vocals fairly well. Outside of that, however, there’s a noticeable lack of standout numbers on From Worlds Beyond, with a lot of the material generating a general sense of familiarity in the sub-thrash and progressive metal department.

On a more serious note, Versailles suffered a brain injury in 2014 and is currently in a coma. With one song remaining to be recorded, the band called upon Helstar vocalist James Rivera to sing on “Vengeance & Might.” Surely the fine folks at Metalville have some type of charity and/or trust from album sales going to Versailles medical bills. May he recover in time for a follow-up.