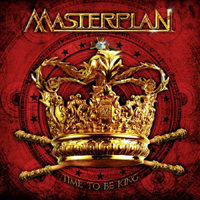 Tail firmly between its collective legs, Masterplan and quasi-legendary singer Jorn Lande have reunited for the Time To Be King album. Frankly, the band was on the right path with ex-Riot singer Mike DiMeo on the mic for 2007’s grand MK: II album, and as much as it is cool to have Jorn back, Time To Be King is a noticeable step back for the German power metallers.

Whereas MK:II and even the band’s excellent self-titled debut from 2003 were anthem-laden, expertly-written power metal affairs, Time to Be King strips away a lot of the charming layers in a favor of a more basic approach. Those in search of pedestrian numbers will find ’em in the form of opener “Riddle of Time” (which coyly plays off of Dio’s “Caught In the Middle”) and the keyboard-dominated “Blow Your Winds,” but neither manage to garner any momentum. Sure, guitarist Roland Grapow is armed with his trademark down-tuned, simplistic riffs,but there’s no real urgency to this thing.

Jorn has a handful of charming, admirable moments, noticeably the soaring chorus to “Time To Be King,” which relishes in the man’s Coverdale-on-Dio vocals. Very regal sounding. “Lonely Winds of War” holds up the ballad end up the spectrum (nice solo, Grapow) and the very-Whitesnake (we’re talking straight out of Slide It In) “The Dark Road” help add to the commercial angle of this thing. The real strike doesn’t come until “Blue Europa,” a wordly, finely-honed power metal gem, but it’s tucked toward the back end of the album, which by then, may have already lost some people.

Rarely do we second-guess bands of Masterplan’s ilk, but the move to get Jorn back in the band, for the time being, has backfired. Sure, it may result in increased album sales (word has it, in Germany people still buy albums) and higher visibility, yet it probably won’t endear them to the hard-to-please power metal crowd, who won’t settle for anything less than a hair away from classic Helloween or Gamma Ray. Well, this is more than few hair away – more like a giant toupee.