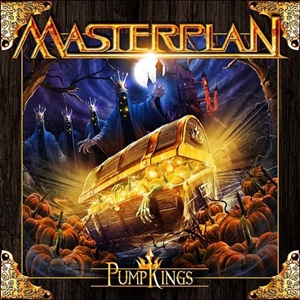 Going back to revisit material guitarist Roland Grapow developed from 1990-2000 during his Helloween years, PumpKings serves as a historical update if you will for Masterplan. Choosing 11 tracks that he wrote or co-wrote, from initial idea to release this record took three years because of his production work in his studio for other artists, plus the Keep Your Dream aLive DVD release during 2015. The obvious differences take shape in Rick Altzi’s more Dio-esque, gritty vocal delivery compared to the soaring Michael Kiske or versatile Andi Deris, and the added technology advances in equipment and production – which could appease some or displease others, depending on your stance of re-recordings.

What’s most exciting for North American listeners would be the fact that almost half of these songs come from two of the worst received Helloween albums of their discography, Pink Bubbles Go Ape and the follow-up Chameleon – records that were dead in the water not only due to a commercial shift in the band’s style, but also the changing trends towards anything ‘melodic’ in heavy music during the early 1990’s. As such, the fiery and uplifting power charger “Someone’s Crying” was clearly a stand out PBGA cut, allowing for Kevin Kott to run rampant on the double kick/ fills and Roland to hit all the key Teutonic rhythm harmonies brilliantly, while “Mr. Ego” showcases Roland’s epic arrangement outlook, Axel Mackenrott’s keyboard pitch bending antics and sultry bass/drum line through the verses take you back to early Rainbow/Whitesnake. Another album that struck a chord with me is the final Helloween record with Roland, The Dark Ride – so you’ll get the spirited title cut and heavier “Escalation 666” that take on an evil, crunchier nuance to illustrate his wide scope of atmosphere and depth of differentiation when it comes to his songwriting.

Considering the uptick for interest in all things Helloween with a Keepers lineup worldwide reunion tour in the cards for the next year or two, PumpKings could fill that bill for those unfamiliar with a lot of their 90’s offerings. Done tastefully and respectfully, Masterplan seem content to play to their bluesy-oriented meets power metal strengths.