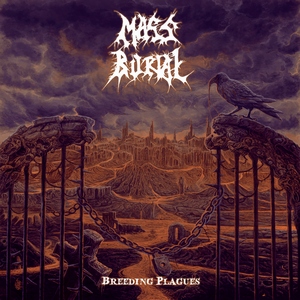 Enter the saw. Like many before them, and assuredly many to come, Spain’s Mass Burial take great joy in following the ‘left hand path’ that came before them. They’ve been at it for a few years at this point, with Breeding Plagues being their third full-length (in addition to shorter releases). It’s also safe to say that many can predict the sound that this one is going to take. But, can it rise above the crowd?

Musically speaking, Breeding Plagues is quite sound. They are all about giving you the old school Swedish death metal sound that you know and love. It’s a nearly impeccable imitation of the trio of Entombed, Dismember, and Grave. The Sunlight Studios buzzsaw guitar riffing is in full effect, and sounds just as menacing and addictive as you can make it. They aren’t afraid to speed things up on the tempo side of things either, with some real rippers (see “Cyanide”) producing a visceral and gut-punch of a reaction. It’s just about as genuine as you can muster it to be. The melodic side also rears its head, with groovier cuts like “Necromancer” and the slow burn of “Hell” providing some romping and catchy material. The biggest thing holding Mass Burial back is exactly what you’d expect it to be – it’s so busy trying to replicate the old masters’ sound that it never really develops one of its own.

If you can forgive the obvious ‘been there, done that’ aspect to hearing yet another old school Swedish death metal band, Mass Burial have a crisp sound that genre-fans are sure to dig. They do it all very well, but one still wishes that they’d take more of an innovative stance to the material instead of simply retreading the past.