Martyr Defiled – No Hope No Morality (Siege of Amida Records)

Martyr Defiled’s latest full-length deserves credit for not trying to be anything other than what it is. It doesn’t set out to reinvent the wheel but instead aims to deliver a smattering of violent tracks that in a live environment are virtually guaranteed to leave hapless moshers collecting their teeth off the floor, and in this endeavor, it succeeds. To a listener spinning the disc in his stereo, though, the tried-and-true deathcore formula runs thin pretty quickly.

Like a herd of buffalo on the Midwestern plains, deathcore’s primary weapon of mass destruction, the breakdown, is running uncontrolled. Undeniably, a well-placed breakdown can add a unique flair to the sometimes-monotonous death metal style. In this case, however, the album would benefit from a little more death metal to break up the breakdowns. Tracks like “616” and “No Morality,” for instance, bring aggression and character in spades, but the continual transitions into beatdown passages come across more as interruptions or asides than intuitive sonic exploration. Add to this that the breakdowns aren’t all too inventive, bearing instead a been-there-done-that quality, and approximately half the record seems more obligatory than inspired.

This by no means indicates the record is bereft of quality, however. Album opener “LVCIFER” is a case in point of how a proper mix of dynamics can make a pummeling, visceral, and memorable song. With breakdowns punctuated by searing guitar leads and a straightforward old-school aesthetic, this track leaves the listener beaten to a pulp but asking for more. Those guitar leads return frequently throughout, balancing simple yet memorable harmonies with more intricate licks, such as in the unabashedly Meshuggah-ish “Sineater.” “Neverender” and “Of Sheep and Swine” add more atmospheric moments to the brutality, bringing a somewhat melodic chorus to the former and an unsettling dissonance to the latter that both serve as conduits to a vastly more maleficent aural plane.

While not a groundbreaking record, No Hope No Morality offers its share of noteworthy elements worth checking out. Except for the most diehard of deathcore acolytes, though, the repetitious breakdown riffing will likely quash the album’s momentum for most listeners. 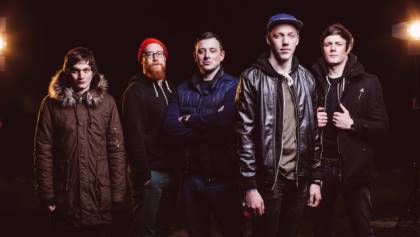