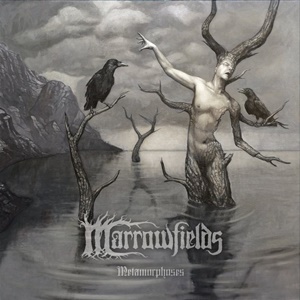 Containing members from other New England acts like Vacant Eyes, Dreaded Silence, The Fateful Hour, and Norseth – Marrowfields is a quintet that develop a hypnotic blend of atmospheric doom metal with extreme touches for their first full-length Metamorphoses. Guitarist Brandon Green generates the compositions and allows his fellow compatriots to flesh out his creativity in an intoxicating manner that has just as much European/Scandinavian cultural textures as it does American despair. There may only be five compositions, and yet there’s enough density, aural visions, and dramatic twists and turns at slower paces that the 52 minutes never seems overbearing.

When the arrangements run from 8:55 to 12:14, you better believe the smallest details matter – and Marrowfields excels in that regard. Calmer sections soothe and caress the subsequent heavy return, as “Crow and Raven” illustrates, vocalist Ken Gillis using a distant, echo-like delivery that matches the sparse musical nature with Brandon and fellow guitarist Josh Moran building clean spirals of guitar play before striking into distortion heavy mode. What can often be difficult in this genre is keeping engagement level as the slower tempos necessitate based on the soundscape present – fortunately drummer AJ Grimes knows when to just through that relevant, exciting fill or pick up the pace just enough to induce headbanging, his snare tone snappy and punchy to work wonders for the Crowbar meets Pallbearer feel of highlight “Birth of the Liberator”. It’s obvious that masters of their domain like Candlemass and Primordial factor into the influence tree of the band, injecting dark cultural feel for many of their musical passages that still maintain hooks through the walls of riffs – the title track containing some semi-blackened/blasting measures at points allowing Ken’s majestic, clean vocals to shine. The listener expects contrast and will get it – just not necessarily in the normal, conventional ways from track to track.

Metamorphoses may be a challenge for Marrowfields to follow-up, as this is quite a stunning debut album. We as listeners just as much as they as musicians will be up for that challenge, but until then, bask in the atmospheric doom metal glory that is this record.