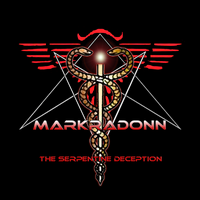 Not often to you get an intriguing band description that actually lives up to the hype. Claiming the title “Barbaric Brass Death Metal,” Markradonn features 9 members in the band. Those fearing of that infamous band with 9 members need not worry here – there’s no gimmicks. Markradonn are the real deal, and contain an entire brass/timpani section within their ranks.

There’s often talk about how death metal can be expanded upon or what limits can be surpassed. Markradonn lets the music do the talking on The Serpentine Deception, their second EP. Living up to their title, this is a serious case of brutal death metal, but with a brass section to support it. Trumpet, trombone, tuba, cimbasso, and french horn all make their appearances in legitimate (read: not cheesy or gimmicky) ways through the tracks, giving the death metal a larger than life feeling. Symphonic elements are all the rage nowadays, but Markradonn is on to something here. “NIN.GISH.ZI.DA.: God of the Tree of Life” makes the most compelling case of the album, with the brass elements feeling more like a spirited and total call to war atop the traditional death metal backbone. It truly feels like a war march (“Initiation Through Torment” also embodies this)!

The brass section being impressive enough, there’s also a timpani as well. The band brings in an Aboriginal/World Music element from time to time, going so far as to include a Didgeridoo and Djembe as well. The title track itself drops all the metal pretense and allows these instruments plenty of space to linger in a fascinating pause between heavier tracks.

Loads of potential abound as you listen to The Serpentine Deception. On only their second EP, they’ve managed to successfully implement as sound that is readily identifiable and original. The implementation of a number of “non-metal” instruments is inspired, and lifts their brand of death metal above the denizens of copycats.