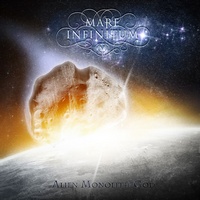 The doom genre seems to be really pushing out a number of winners here lately. The latest one to the table is that of Russia’s Mare Infinitum. Alien Monolith God is the band’s second effort, following up 2011’s Sea of Infinity. Though just using the doom tag for the band almost seems a disservice, for what they are accomplishing on Alien Monolith God is something more unique and their own.

When you begin listening to the album’s first track, “The Nightmare Corpse-City of R’lyeh,” you’ll hear the slow gloom begin to set in, but it quickly jumps past the usual death/doom tropes. One such method is that of the vocals. Sure, there’s some super-low gurgles that pair nicely with the sometimes crushing guitar tone. But there are also some more traditional metal vocals that pop up from time to time. It works much better than one might expect, and does add nicely to the band’s repertoire. Upon hitting the second track, you’ll notice a bit of psychedelia that opens things up. Throughout the remainder of the album, you’ll also hear bits of death, sludge, progressive, and more! The strongest aspect about all these parts are how seamless they appear in transition. The 14-minute title track bounces from burly, crawling, near-death metal to progressive moments without so much as a bat of an eye. Lastly, the melodies are soaring, with “The Sun That Harasses My Solitude” (what a great title) coming in first, with some great, epic and emotive moments around the midway point of the song.

Those looking for a more fresh approach to their doom/death should gravitate towards Mare Infinitum. A treat to see such a variety involved, complete with no issues in transition. Alien Monolith God is destined to be one of this year’s sleeper hits.